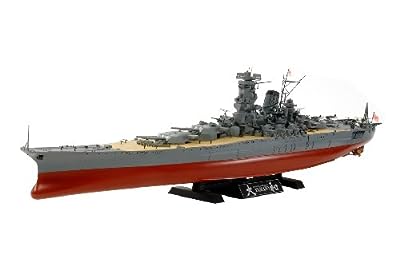 Yamato [original moulds improved !] Assembly kit Scale = 1:350th__________________________Special Details With many revolutionary features incorporated into her design, the Yamato was completed in December 1941 and met her final fate at the hands of American Navy carrier aircraft in the South China Sea while on a one way mission to Okinawa. This model features minor modifications to Tamiya's previous Yamato replicas Items 78002 and 78014 and has her looking as she did just prior to departing for her final mission, in an exquisite 1/350 scale assembly kit display model. The Yamato's massive imposing silhouette is accurately reproduced, and both the main gun turrets and secondary armament turrets can be rotated even after assembly.Yamato was the lead ship of the Yamato class of Imperial Japanese Navy World War II battleships. She and her sister ship, Musashi, were the heaviest and most powerfully armed battleships ever constructed, displacing 72,800 tonnes at full load and armed with nine 46 cm (18.1 inch) 45 Caliber Type 94 main guns. Neither ship survived the war.Named after the ancient Japanese Yamato Province, Yamato was designed to counter the numerically superior battleship fleet of the United States, Japan's main rival in the Pacific. She was laid down in 1937 and formally commissioned a week after the Pearl Harbor attack in late 1941. Throughout 1942, she served as the flagship of the Japanese Combined Fleet, and in June 1942 Admiral Isoroku Yamamoto directed the fleet from her bridge during the Battle of Midway, a disastrous defeat for Japan. Musashi took over as the Combined Fleet flagship in early 1943, and Yamato spent the rest of the year, and much of 1944, moving between the major Japanese naval bases of Truk and Kure in response to American threats. Although present at the Battle of the Philippine Sea in June 1944, she played no part in the battle.The only time Yamato fired her main guns at enemy surface targets was in October 1944, when she was sent to