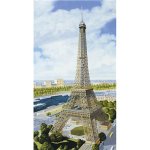 Heller Kit-Tour EiffelModelLength : 18.8 cmHeight : 47.7 cm BoxWidth : 45.4 cmHeight : 25 cmDepth : 6 cmBuilt for the Universal Exhibition celebrating the centenary of the French revolution, the Eiffel Tower was completed in 1889. It took 2 years to build, from 1st July 1887 to 31st March 1889 (planting of the flag at the summit). From the time of its inauguration, it proved a phenomenal success and two million people ascended the Tower. Since it was built it has welcomed more than 170 million visitors, and nowadays more than 5 million tourists climb up it each year. The anticipated lifetime of the Eiffel Tower was no more than 20 years. Today it is entering the XXIst century. After an initial broadcast of radio signals to the Pantheon in 1898 by Eugène Ducretet, Eiffel contacted the military authorities in 1901 and the Tower became a long distance communications antenna. A permanent radio station was installed in 1906, ensuring the future of the Tower. In 1921 the first public radio broadcast in Europe was broadcasted from its antenna.FEATURESComposition: 18 038 metal parts,2 500 000 rivetsWeight of the metallic framework: 7 300 tonnesTotal weight: 10 100 tonnesHeight (since 1994): 318.7m (with antenna)Paint: 50 tonnes of paint every 7 yearsNumber of steps: 1665