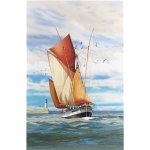 THONIER ARMOR 1/125 Scale Kit
89 Pieces
Box Dimensions: 36 x 18.5 x 4.3cm
Model Dimensions: 22.8 x 23.5cm
Very little is known about the origin of boat fishing for 15kg white tuna, known also as albacore, but it seems to date far back. Between June and October, the tuna swim along the Basque coasts and then back north up to the Gulf of Gasgogne, moving progressively further from the coast. Fishing off the coast brings with it two types of constraint: having boats able to handle the high seas, and the ability to return quickly to harbour to sell the catch while it's still edible, but also in the event of a storm. Around 1850, fishermen from the island of Groix and up to the islands of Yeu and Ré, used their sardine fishing longboats and their chasse-marées (literally, tide hunters) loaded with tuna during the season using trolling rigs. Their decked longboats possessed excellent qualities in that they were solid, but they also had some debilitating defects, such as long keels which made quick manoeuvring very difficult. In the 1880s a new type of boat appearedthe dandyquickly nicknamed the dundée in French. The cutter rigging included two masts: a main mast made entirely of one piece, a large sail, a foresail (the jib) and a rear sail (the driver yard or ringtail). The principal characteristic of the dandy that differentiates it from other cutter rigs, is the presence of a spar to regulate the ringtail sheet, in the place of a pivoting boom around the mast. The keel can exceed 12m in length. She is said to be "en difference" (in difference, heel - rear - very deep compared to the forefoot front -) to allow for quick tacking. The entire vessel can weight 50 to 60 tonnes, lead by a crew of around fifteen of men. As soon as a shoal of fish is spotted, sometimes even as soon as they leave the harbour, each of the seven lines are lowered while the ship has to maintain a speed of 5 to 7 knots, an essential condition for fishing white tuna. The f